March Kennel Round Up And Early April News

March in numbers (graded runners only)

March in numbers (open runners only)

March has seen some new dogs come into the kennel. 3 dogs were purchased at the Kilkenny sales to boost the graded strength: Crinkill Louise, Petite Hollie and Petite Heidi who have started trialling in. A small group of owners purchased Hazelhill Train who has just had his first 480m trial and the Bangon owners added Bangon Kauto to their team.

As we welcome new dogs to Watford Gap, we have also had kennel stalwarts Final Wolf, Skywalker Iris, Forever Never, Job Sorted and Im Noodle retiring and heading off to find their forever homes. We are lucky to have the Hall Green Greyhound Trust branch on site and so it’s great to be able to see the dogs leave with their new owners for the next chapter in their story.

We’ve had a few meetings with a good proportion of winners including a 686/1 4 timer in back to back races on 30th March. Just 3 days later we then had a hat trick of winners in back to back races with the fast finishing Dolla Joker missing out by a head in the race after which would have given us another 4 timer. In terms of individual efforts, we had 26 dogs register victories in March. 24 in graded races and 2 in opens with Rage Storm and Daddys Prince both winning 6 bend opens at Monmore. 6 dogs won 2 races in March with a couple just missing out in their hat trick bids.

As we start April it has been great to get our new Watford Gap Racing Club Syndicate off the ground. The syndicate are in the process of purchasing a dog which we are hoping will give lots of fun and interest at the higher end of the racing strength and brings together existing and new owners to the kennel.

As restrictions continue to relax, it is lovely to see owners back at the kennel and being able to return to the track looks to be the next step come the middle of May which will be a real boost for owners. Also to look forward to in May is the Entain Track Championship which is being held at Hove. We will cheering on our home track and it would be great if we were also able to provide a runner to two for the event.

Although there has been lots of positive news in the last few weeks, it is with great sadness that we share the passing of one of our racers, Ballymac Wizard. Merlin, as he was known in the kennel, unfortunately suffered a heart attack and died after his race on 1st April. He was seen to immediately by the track vet but sadly there was nothing that could be done. At over 37kg he was a larger than life character who will be really missed by his owners and all of the kennel staff. 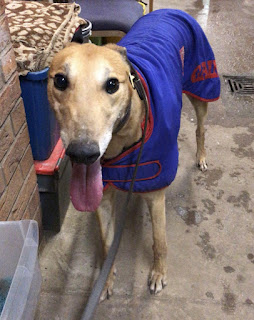 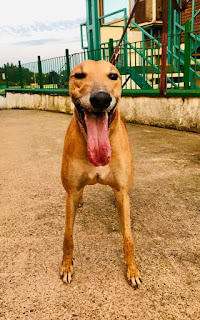 With some new dogs coming through grading trials and some even newer additions to the kennel in the coming weeks there’s lots to look forward to. We are hoping to build on a good start to the year on the graded front and start to put a team together to head out open racing.

With the start of a new year we are going to make a renewed effort to keep the website up to date and venture into the world of social media in the coming weeks - more details will follow soon.

Despite the weather and unprecedented times, January has started positively for the kennel with 30 winners from 129 runners to date giving a win percentage of  23.25%. These stats have been helped by two pups, Abigails Mandy and Ballymac Layla,  having three wins each during January. They are progressing well through the grades and should continue to improve in the coming months.

From February, Monmore’s evening cards on a Thursday and Saturday evening will be on RPGTV which is a real boost for owners who are missing seeing their dogs. It won’t be the same as being there in person but it will be good to enjoy watching the racing on this platform.

After a busy few weeks on the open race scene with the likes of Inch Forward and Rosshill Robbie giving a good account of themselves and making it on to the winners podium, this week has been a little quieter. Focus now shifts to the upcoming St Leger at Perry Barr where we are hoping to have a couple of runners. We shall see how they fair in the trial stakes next Saturday. Inch Forward will be aimed at the TV trophy at Towcester but hopefully there will be a suitable race for her on sky in the next few meetings.

On the graded side it was great to see Freedom Monica, Inky Boom and Inky Bleu all receive their ton up trophies on Thursday and Trotsky win August's dog of the month with an impressive four from five during the month.

Over the last few weeks we've welcomed several new dogs and owners to the kennels and we shall look forward to watching their progress over the next few weeks.
Posted by Kennel at 05:12 No comments:

In the Take the Crown x Ballymac Mighty August '15 litter, bred and reared by Stuart Buckland, there were a total of 10 pups.  With 'Feel the Power' securing his first win last week all 10 have now won a race - a really fantastic training performance! Since the first hitting the track in December the litter have racked up a total of 40 wins between them and some of the litter have already won minor open races and others have contested competitions such as the British Bred Puppy event at Sheffield and the Gymcrack at Kinsley. A number will be heading to Swindon for the Produce Stakes in July, a competition which Stuart previously won in 2013 with Son of Delboy. There's surely even more to come from this super litter - exciting times ahead!
Posted by Kennel at 15:44 No comments:

Dog of the Month for May is Im Noodle (Take The Crown-Ballymac Mighty, Aug 15) Owned by Paul Clements, trained by Stuart Buckland. The British bred pup went to traps on six occasions and won five rising from A5 to win A2 and never returning shorter than 4-1. The presentation will be on the first Thursday in July. In the process of claiming his five wins he also managed to win four in a row which is quite a remarkable achievement in graded company. Well done to all connections.

Inch Forward ran a tremendous race at Central Park on 7th June to take the final of  the British Bred St Leger. Having qualified for the final in third place the previous week, she really showed class and stamina to win by a head in 39.90 and defy her odds of 9/1. Well done to all owners Paul and Gill Allen who were very proud of her.

In her next open race outing, she will be looking to step up in trip, with the Dorando marathon on Derby Final night the most likely target.  It's fantastic to see a homebred taking on leading open race dogs in these types of competitions and there definitely looks more to come from this super bitch.

Watch the race by clicking the link below

Presentation to trainer Stuart Buckland and owners Paul and Gill Allen
Posted by Kennel at 15:23 No comments:

The kennel has been in good form over the weekend with 4 winners on Friday Supreme Pete 4/1,Weather Balloon7/2,Supreme Zagreb2/1,andDroopys Salerno5/1 . Another 4 winners today Supreme Riga 5/2, Supreme Athens 8/1 , Supreme Claret 3/1, and Come On Rodney 5/2.No less than 6 of them home bred .
Lets hope the form continues with 8 runners on tomorrows bags card , as well as Artic Lightning ,Supreme Rioja and Supreme Shiraz travelling to Sheffield for the Britsh Bred Puppy Cup semi finals and Fabulous Juice running in the 480 maiden final at Hall Green on Wednesday .
Posted by Unknown at 11:00 No comments: